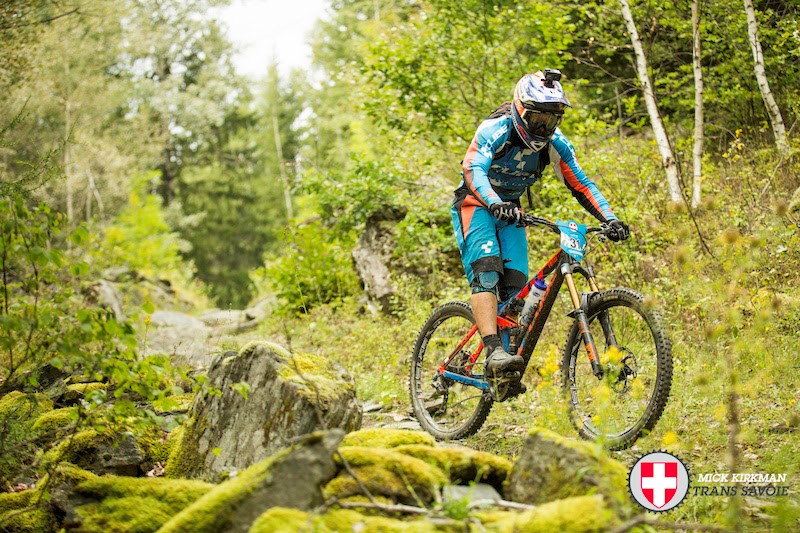 Standings after Day One: 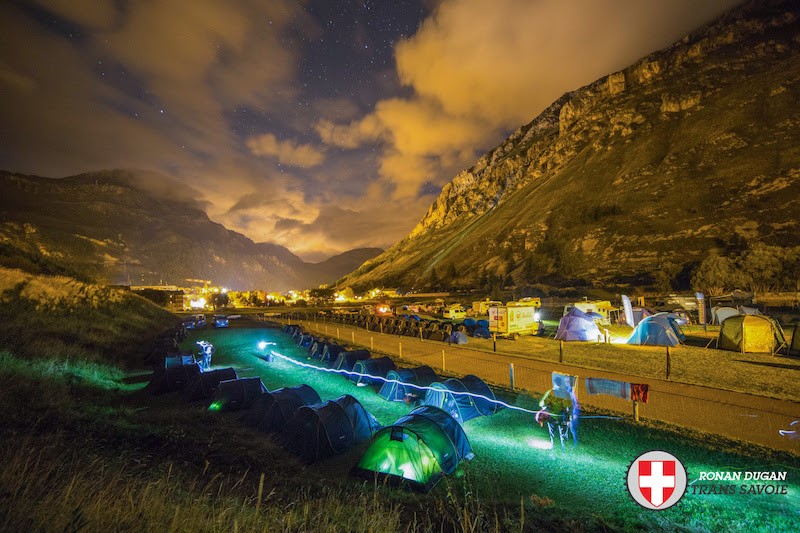 Trans-Savoie started with riders just a handful of km from the Italian border in the legendary ski resort of Val d’Isere, before heading full tilt down the Tarentaise valley. Racers in that other race that frequents this part of the world, the Tour de France, might find themselves struggling up the endless climb to the highest tarmac in the Alps, the 2,764m summit of the Col de l’Iseran, but in the T-S version of events, it’s mostly downhill from the top of the Telépherique Olympique cable car for 50km or so. 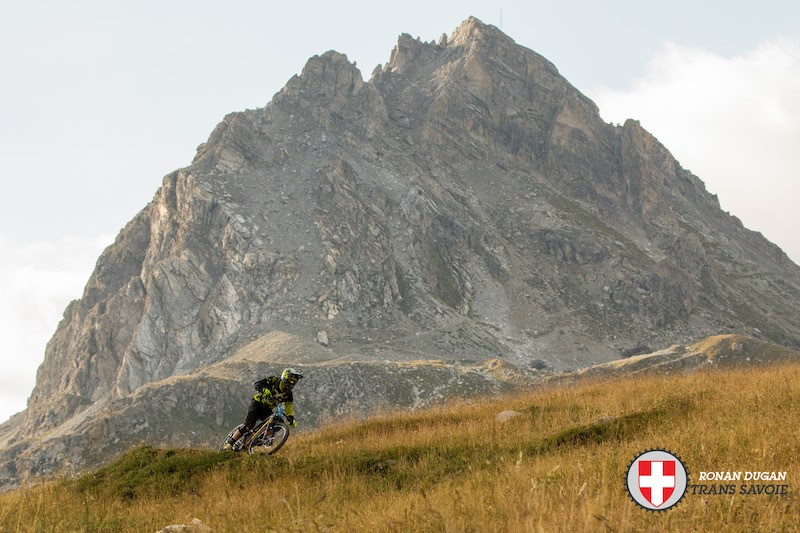 Sunday morning saw riders wake to dramatic skies and the threat of thunderstorms, but for the most part the weather held off with just a few smatterings of rain to add some spice to the steeper sections. Experience has taught most to watch their backs and go with the flow on the first day of any multi-day stage race (to finish first, you first need to finish, and all that…), but for those lacking experience or not heeding the warnings that 80% of your maximum for the week is a race-wining pace, Day One is a traditionally a big day for mechanicals and misadventure. This year proved no exception, and plenty of bikes and riders took a pounding getting better acquainted with the Savoie granite than they’d have liked. Around ten riders didn’t get any further than day one. 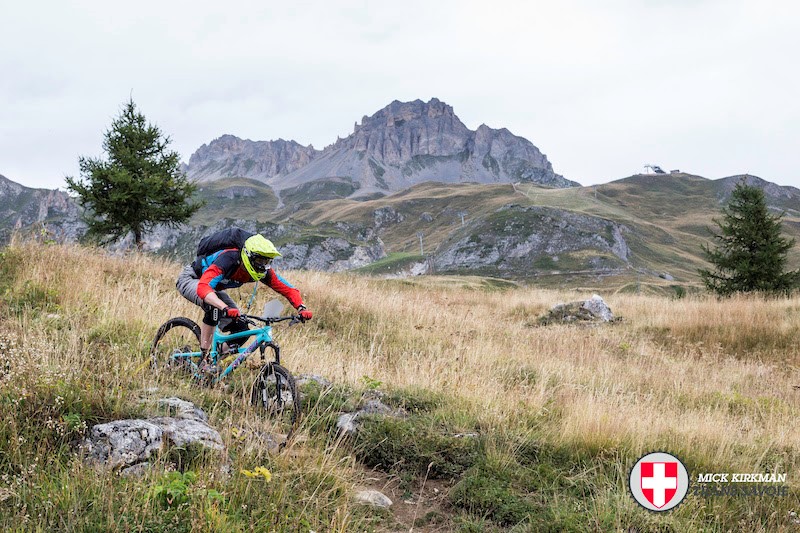 For this reason, Stage One was simply called “Prelude” and led the riders down a tame (by T-S standards) bike park trail to ease people into the week. Still, 450m of timed descending is hardly an early morning trail ride and it was tough to generate speed and momentum from the endless berms and jumps threading across the high Alpine meadows and ski pistes. Before safely making it across to Tignes, the sister-resort to Val d’Isere, racers needed to tackle the second stage of the day, “Comb Over”. At 3km it wasn’t the longest, but a challenging rocky, technical puzzle threading down 500m of height drop in extremely rocky terrain at first and then steep, eroded shallow gulleys and paths down past the resort. There was awesome flow if you got it right, but pure danger if your line choice wasn’t precise. The third stage led down to the lake and was brand new for 2015. we adapted one of the riders’ previous favourites to incorporate even more incredible singletrack than before, and if the constant swooping, flowing fast ribbon of what’s been dubbed “The New Boss” (with one of the best views in the Alps laid out in front of you) didn’t get you grinning like a maniac on wheels, try placing two fingers on your wrist between the bone and the tendon and try to check your pulse. 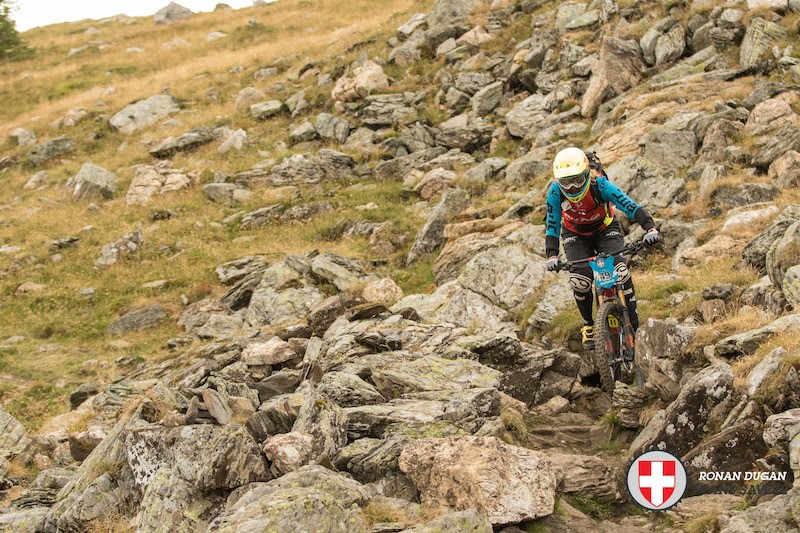 Before lunch, Stage 4 introduced a brand new trail this year, and if one thing stood out, it was the pure speed you could generate in places if you were crazy enough. Straight line sections and steep gradients on rough ground offered a carrot to the brave, but the penalties for getting it wrong on this kind of terrain are no joke. No one said it was going to be easy, and this was the first stage of the race with a 5+ technical rating – our version of ‘pretty mental’. Lunch next to the stunning Lac du Cheval topped the morning off, and looking around, the stoke factor appeared to be reaching maximum for most people. 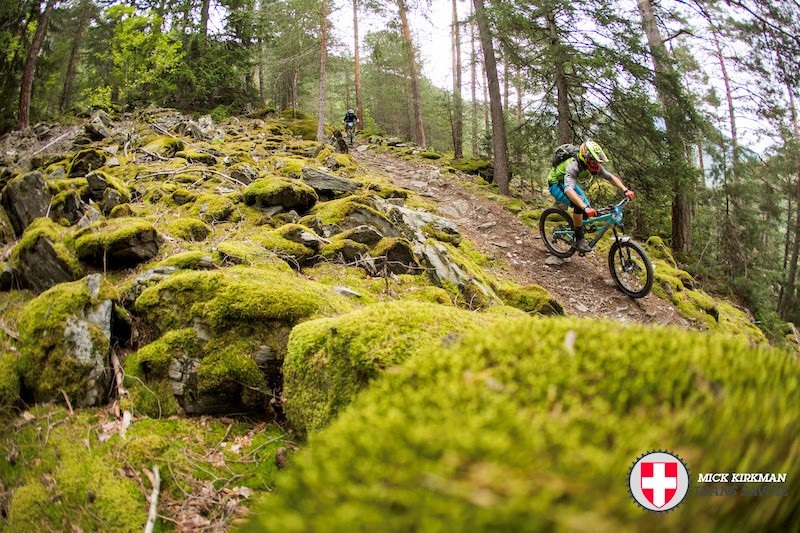 Day One’s afternoon started with a long, pretty liaison journey up and down the less travelled east side of the Tarentaise valley, eventually passing through the 18th century farming village of La Monal. This tiny hamlet is listed and protected for its architectural and historical importance, and surrounded by larch forest and simply incredible views of Mont Pourri and its glacier…a pretty pretty tempting place to sit a while amongst the ancient stone huts and babbling streams and contemplate the awesome places our bikes can take us. Sadly, we either had more photos to take or timed stages to survive. 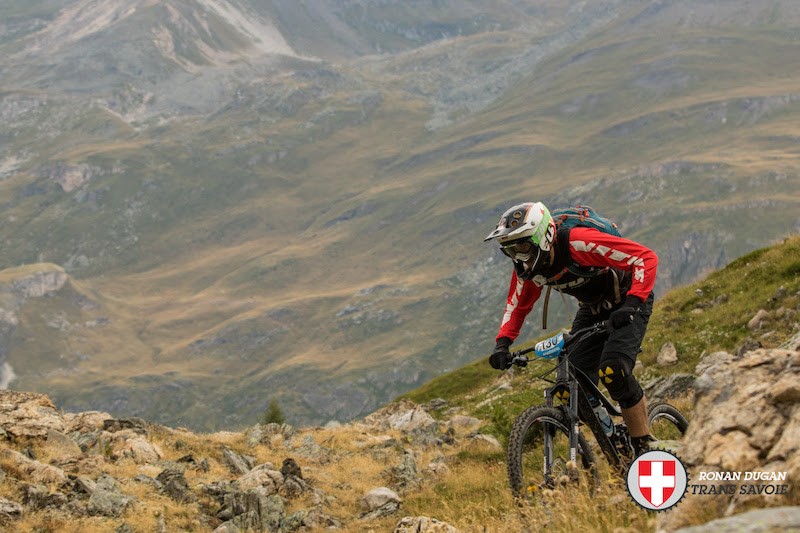 Passing through another beautiful traditional Savoie village, “Heidi’s Bottom” trail was up next and this has become something of a legendary trail in these parts. We switched the route up this year, and instead of charging through town (with locals cheering in the street last year) and doing the whole thing top to bottom, we split the descent into two longer stages. The first part of Heidi’s was extended into new territory and some killer, fresh and loamy new forest singletrack usually missed by the standard route. This did mean riders had to pedal back up to where we’d previously raced through the town, but nobody seemed too concerned after sampling the extra 200m of vertical this generated. The bottom portion of Heidi’s can get quite crazy at race pace and the main idea for the split was that the riders shouldn’t be too knackered to enjoy it. The trail’s finale smashed through a succession of rock drops and gulleys to the sound of wheels chattering and wasn’t for the faint-hearted at full tilt, but was still (relatively) safe for all riders choosing a more sensible speed (or walking down). Some of the top guys hammering through this section were pretty scary to watch. After a full day on the clock Nico Lau leads the race but only by around 30secs from his countryman François Billy Maitre, with Jamie Nicoll close in third. In the women’s field, EWS contender Meggie Bichard leads by over three minutes after six stages. 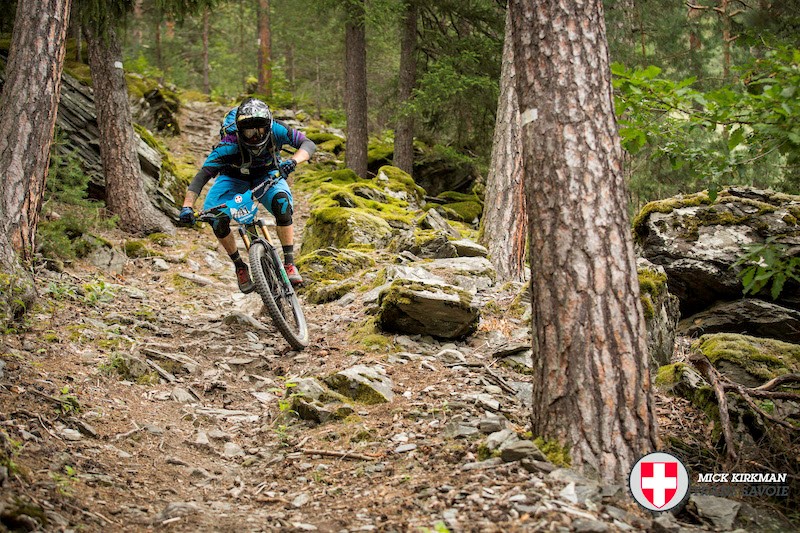 After the final stage, a calming cruise brought the riders back down the road to the campsite at Séez. Bikes needed fixing while riders needed rest and food before we do it all again tomorrow. What a day. 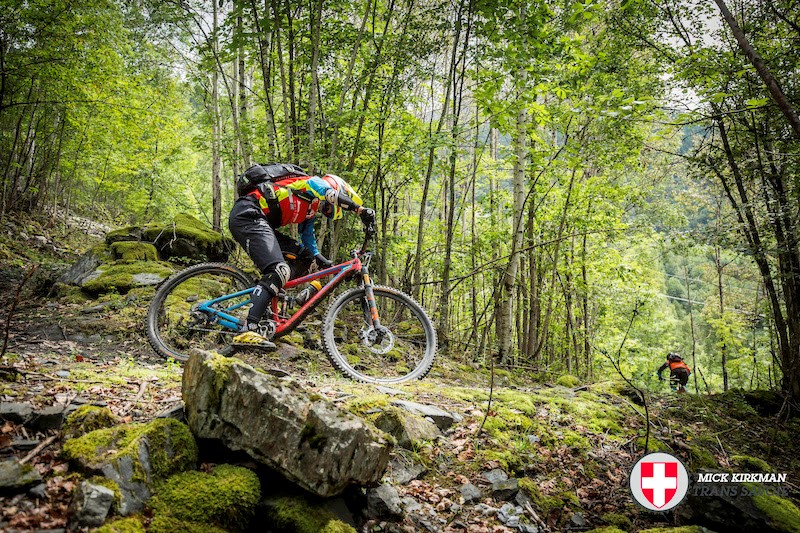 Highlights video will be with you soon. 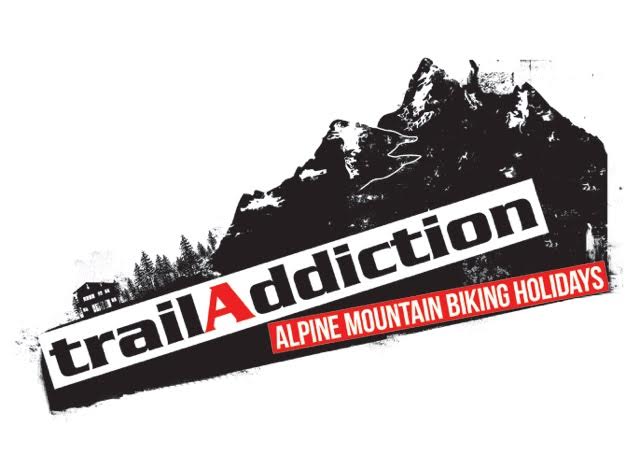 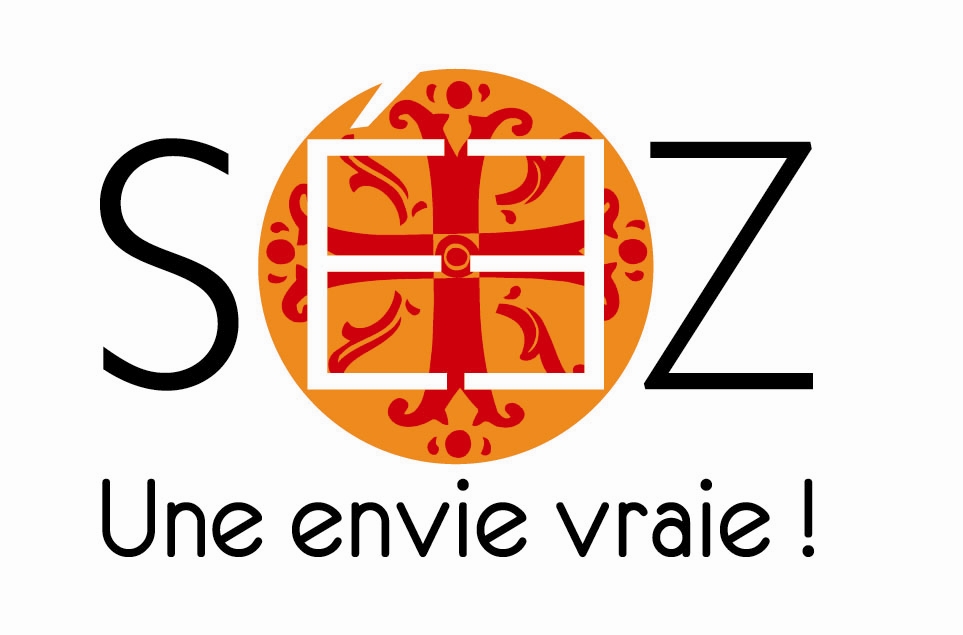